Today I had more ascites fluid removed from my belly. Some of it was confined to cysts and some was free-flowing in the abdominal area. Feeling much better!

Five days in the hospital dealing with the same problem I had in September 2015... ascites fluid had collected this time around my right lung. Same surgery was performed (see 9/02-10/15 below).

Due to ongoing issues, my cancer, as well as scar tissue and adhesions from surgeries, I occasionally get a blockage somewhere in my small intestines - due to constant vomiting, I usually end up in the ER to stop the vomiting and get much needed fluids.

Nine days in the hospital! I had an unusual cough that just would not go away. Ended up being ascites fluid (weeping fluid from peritoneal scar tissue) and had collected around my left lung. Two-thirds of my lung had collapsed. This is called a pleural effusion and you can learn more about it at the following link: https://en.wikipedia.org/wiki/Pleural_effusion.

Next, surgery was performed called Pleurodesis to insure that no more fluid would surround my lung: https://en.wikipedia.org/wiki/Pleurodesis

Since I've grown tired of chemo, radiation, and surgery -- just returned from MD Anderson in Houston, TX. Genomic testing has been done and then we'll be looking into trial testing once results come back.

It's been almost three years and I am finally eating anything I want again with no fear of vomiting. Still do not know what precipitated the bowel problems after the surgery in 03/17/11.

Just returned from Israel!! Oh to walk where Jesus walked! 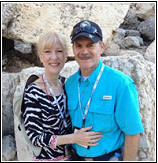 Was scheduled for surgery yesterday! Cancelled because I had NO green lights – only red – mainly because my OBGYN wanted another surgeon present “in case” intestines needed to be dissected!! Although I had a lot of pain, I didn’t want to wake up from surgery worse!

Lorem Ipsum is simply dummy text of the printing and typesetting industry. Lorem Ipsum has been the industry’s standard dummy text ever since the 1500s, when an unknown printer took a galley of type and scrambled it to make a type specimen book.